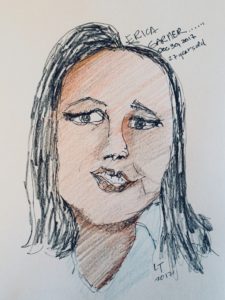 Erica Garner, activist, daughter of Eric Garner, who suffered death by chokehold of a police officer in the streets of New York. Her father was a victim because he did not commit a crime worth dying for in the street. He also suffered from asthma. His daughter who was not clear on her mission took up one after the death of her father to fight the cause against loss of life of African American Men at the hands of white police officers. Though not charged, investigations did yield that the officer violated Eric Garner’s due process rights during an arrest; a chokehold was excessive force ending life.

There is always more behind a story then the story itself. Erica was a mother of two children, one born this past August. She was in advertisement for the Bernie Sanders campaign. She was part of the Black Lives Matter movement. She expressed disappointment and anger at the Obama Justice Department for not doing more for the civil rights of her dad. She had a full plate. She had finally found purpose and meaning. Her father’s death brought her as the eldest child into the national spotlight, a speaker, a bearer of the experience of loss and victimization.

In the myst of all this she has a child. Recent research shows that black women are three times more likely to die shortly after childbirth than white women. In 2017 a study that looks at the level of healthcare during pregnancy and follow up care are demons for the African American Woman’s survival rates. It does not matter the social economic situation of a mother. The institutional racism, prejudicial attitudes, and dismissive postures of health professionals contribute to the psychological well being of a pregnant mother, whose anxiety causes her to not interact with the system for proper care, and in some cases a rush to get away from traditional care in hospitals or even visit clinics. Erica Garner was actually typical. Imagine only 27 years of age, not knowing that a heart attack after child birth which became enlarged was not something on her radar screen. For that matter, more than likely no one else around her or those pulling on her new found purpose to be on this or that program to advance a cause that gave her passion. She could do it all. Right? After all she is only 27 years old, child bearing age. Erica had no knowledge that her heart had enlarged after having a baby and first heart attack. She probably did not give much thought to this newly researched phenomenon of black women low survival rates after childbirths and all the causes that bring on stress. Even as she was celebrating over the holiday season which is known for being one of the most stressful times of the year for parents, after addressing activists issues, her body was a ticking time bomb.

Asthma was the culprit. What triggers asthma attacks? While stress is not the most common cause like being allergic to things, ‘non allergic causes involves stress, exercise, a cold or flu, or exposure to extreme weather, irritants in the air or some medications’ according to the College of Allergy, Asthma and Immunology. She according to reports could not breathe, it shut off oxygen to her brain and caused a massive heart attack her second one in months. She was put into an induced coma state and never recovered. Who was paying attention? Erica will be remembered for her response to her father’s death, as an activist, thus achieving her life’s purpose. She was also a mother, a daughter, a sister, and a leader. Because of her role and importance to movements like ‘Black Lives Matter’, and speaking specifically about her non-violent father under attack by over zealous and aggressive force from NYPD, she will be remembered. The inadvertent memory she will also leave and hopefully not lost in the heat of moment was her health and support systems for her sustainability as a life force for her family and her passions. She could also be the poster child for black birth giving women death statistics. Something coming onto the radar screen that says to healthcare system and professionals that racism may be more life threatening to our people than police violence in the justice system.