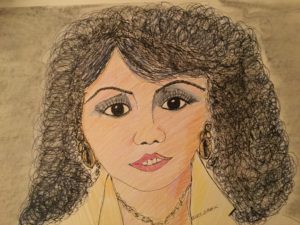 Fortunate for us Eunice Johnson came along at a time when the  our consciousness as a people was being challenged by the effects of Jim Crow. Our struggle to overcome was aided by her determination to bring ‘mind blowing’ and uplifting fashion shows to African American woman. She let it be known that we could  wear the best designed clothes that international fashion offered. She mixed black fashion designer with noted couture designers from Paris, France. She established networks of women throughout the country, navigated shopping at runway shows overseas in Paris and Milan, Italy, thereby selecting the most exciting styles that would challenge her captive USA audiences.  She proved we could wear bright colors. She was not limited to women; her styles included high style for me as well.  With extraordinary taste and flair Eunice Johnson, a child of Selma, Alabama, educated at three schools for social work, journalism and interior design became noted as our community’s royalty, who brought the very best. Women appreciated her and wore their best to her fashion shows. What is notable is that she had created an economic engine. While we have fashion shows today, there is nothing of this magnitude that acts as jobs creator for models, designers, event planners, announcers, logistics people, with development opportunities from all involved in the production. She was a pioneer, a woman of great taste, an inspiration, and a standard for fashion and beauty.

After seeing the last stop and show of the Ebony Fashion Fair exhibit early January 2018, at the North Carolina Museum of Art, one has to contemplate the full economic impact this show had during its run  for over 50 years. Where did Fashion Fair began? It started as a fundraiser for a hospital in New Orleans in 1958 according to wikipedia. This show toured throughout the USA in 200 cities including Canada and the Caribbean, featuring African American models and fashion designers. It raised over $55 million. Her cosmetic line was created out of providing the appropriate makeup for her models, because there were no lines available for women of color, resulting in her Fashion Fair Cosmetic line and legacy. While Johnson Publishing Company magazines ‘Ebony and Jet’ have sold, the name carries the Fashion Fair US/UK cosmetic divisions and archives of photos.  The people who were fortunate enough to attend an Ebony Fashion Fair Show over the years experienced Eunice Johnson’s vision to uplift, inspire, and promote the beauty of African American Women.