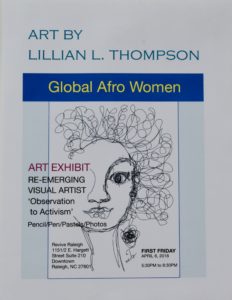 Why re-emerge as a visual artist after so many years of being a designer, project manager    or coordinator of the built environment? As it goes, my youth was involved with drawing among other things (like dancing), exposing more talent after entering Howard University. Fortunate to work under some impressive professors and national acclaimed artists. Regardless that I had my sites set on Interior Design and later studied Architecture also with impressive teachers. While art is part of architecture and interior design, actual drawing has suffered because of technology requirements. Perhaps the very best Architects, which I respect, especially  those with great talent and foresight to envision a building, still form sketchy drawings and move through a process to technical and artistic buildings i.e Michael Graves and Phil Freelon.

In the beginning of 2017 I picked up my favorite pens and started sketching again. What poured out of me were not masterpieces but unique expressions of a quiet spirit. I remain an artist. I am still excited about the idea that art can tell stories and empower souls. I have moved in four steps with my drawings which I will show at the Exhibit on April 6, 2018, a First Friday in Downtown Raleigh at the Revive Raleigh Massage Therapy space at 1151/2 second level. I will bring my recent discoveries, as I return to the endless possibilities of artistic expression. My reveal at this age is as exciting as my triumphs in the design field against many tribulations.

This work is causing reflection and introspection for me as a human being,  an African-American, all the many titles I’ve had and more importantly, citizen of the Globe and member of the Global Afro Woman family, of which I intend to investigate and flourish within. This first public exhibit, an adventure which I hope many who come to see can look for my evolution over this year as a new beginning. This link will reveal a flyer for the exhibit.  Art by LT Exhibit Mailer pdf

Art and Article by Lillian L. Thompson of Lillianonline.us